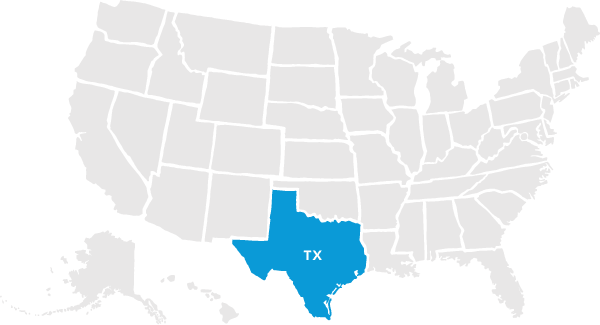 Texas is the largest of the lower 48 states in terms of area and is the second-most populated state after California with more than 27 million residents.  The population is clustered in the urban centers of Houston, San Antonio, the state capital of Austin, and the Dallas-Fort Worth area.  Three of the 10 most-populated cities in the country are in Texas.  The overall population of the state rose between 2010 and 2016 by nearly three million people.

Texas ranks firmly in the bottom half of states in terms of average home value, meaning houses are quite affordable in the Lone Star state.  Overall, the state has one of the healthiest housing markets.

The median cost of a home in Texas is $151,500, though the average increases to $289,000 as of August 2019 for homes in Houston and to nearly $400,000 in Austin.  Home values in Austin have increased significantly in the last several years thanks in part to a number of tech companies that have relocated there.  San Antonio median home prices come in at around $239,900.

Factors That Can Affect Your Texas Mortgage Calculations

An important side of Texas homes is that they go quickly—the average length of time a home is on the market is only 43 days.

According to our Texas mortgage calculator, sales of single-family homes were strong in 2021 but have recently seen a decline of around 90% from last year's sales due to rising mortgage rates in Texas.

Housing Sales were up in 2021 with Austin leading at 15.9% growth and other metro areas of the state also showing upward trends on the Texas mortgage calculator. Sizeable demand for homes in Texas, even with the rise in interest rates, means those on the market do not tend to stay there for long.

Property taxes are rather high compared to the rest of the nation, which is offset somewhat by the lack of a state income tax in the state. After using the Texas mortgage calculator, the effective property tax rate in Texas on average is 1.80%, the seventh-highest in the country.

Texas property taxes are set as a percentage of the appraised value of your home, depending on local tax rates. This means how much you pay in taxes can vary considerably depending on where in Texas you happen to live.

The county you live in will decide your home’s current market value every year. The bill for your property tax is typically mailed at the beginning of October and is due by the end of the following January. Fortunately for Texas homeowners, the state offers various exemptions to property taxes, such as being a veteran, disabled, or over 64 years old.

In any state, you need to take closing costs into consideration prior to buying a home. Thankfully, closing costs are a once-for-all payment. For closing costs in the state of Texas, expect to pay around 1.41% of the home purchase price. This is a crucial step when factoring in every mortgage calculation in Texas. To Texas' credit, it is one of a handful of states which doesn’t charge any transfer taxes or include a state recordation tax.

Remember that at closing you will be responsible for several fees including origination points, commitment fee, processing charges, tax service, broker fee, and others. If you opt for things like a credit report, flood certification, and an appraisal, you will have to pay for those as well.

According to the Bureau of Labor Statistics, of the more than 14 million employed Texans, most work in the areas of office and administrative support, sales, food preparation and serving, transportation, and education.

As many know, the oil and gas industries dominate the state’s economy with more than $100 billion brought in every year through extraction, making Texas the number one energy producer in the US.  The state’s unemployment rate is also 4.3%; slightly more than the national average.

A number of both public and privately held companies are headquartered in Texas, including such recognizable businesses as ExxonMobil, Phillips 66, Valero, AT&T, Sysco, Halliburton, and American Airlines.

Other Texas Costs That Can Affect Texas Mortgage Calculations

Our mortgage calculator for Texas found that those who put down less than 20% for their down payment will most likely be forced to pay for private mortgage insurance (PMI) to protect the lender for conventional mortgages should they default. PMI may be canceled upon meeting certain conditions, however.

PMI premiums can range from 0.5% to nearly 6% of the loan principal depending upon how much is put down, the type of loan, the loan term, and the borrower’s credit score.

Texas averages $3,429 each year for homeowners' insurance. The higher annual insurance costs are a result of parts of the state being vulnerable to floods and hurricanes and should be considered when researching Texas mortgage calculations. In addition, the Texas Office of Public Insurance Counsel reports that agent commissions and acquisition costs, advertising and underwriting are 65% higher than the rest of the nation.

Home inspections in Texas can cost roughly between $350 and $600 with termite or mold inspections carrying an additional fee. Luckily for homeowners, Texas regulates the industry through licensing.