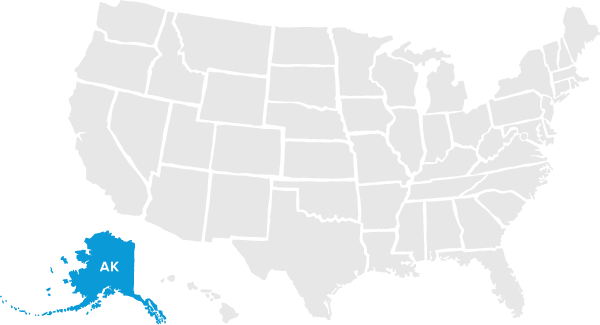 How Much Will Your Mortgage Be in Alaska?

Alaska is the largest state by area and the third least-populous state in the U.S. Known as “The Last Frontier,” Alaska’s housing market is on par with the national average for affordability. Approximately half of the population dwells in the greater metropolitan area of Anchorage, near the Gulf of Alaska. Despite this, property prices have risen over the years but not at the same rate as other U.S. States.

Factors That Can Affect Your Alaska Mortgage Calculations

According to information gathered by Zillow, home prices in Alaska have declined over the past year at a rate of 2.3%. Zillow predicts they will fall a further 4.8% over the next year. The median price of homes listed in the state is $282,900.

Since roughly half of the Alaskan population dwells in Anchorage, home prices here are higher than the state’s average. The median price of homes currently listed in Anchorage is $315,000. Home values have also gone up 7.5% over the past year.

The state’s capital city, Juneau, is also located off the Gulf of Alaska in the southern-eastern region of the state, close to the border of British Columbia. Home prices here are even higher than in Anchorage. The average price of homes currently listed in Juneau is $351,914. Juneau has also seen an increase in home value over the past year. Home values have risen 3.1%.

Kodiak is an island in the Gulf of Alaska. Homes currently listed in the town of Kodiak on Kodiak Island have a median price of $314,000, similar to the average costs in Anchorage. Home values have risen 4.1% over the past year in Kodiak.

The average effective property tax rate in Alaska is 1.19%, which is higher than the national average rate of 1.08%. However, many smaller cities in Alaska do not levy any property tax. It will depend on where you purchase your property, for example, the municipality of Anchorage charges a rate of 1.32% whereas Juneau has a rate of 0.92%.

Alaska’s economy is dominated by the oil and gas industry and are their main export product. Seafood such as salmon, cod, and crab are another major export from the state.

Despite its lack of population, Alaska is a wealthy state. The median household income according to the Census ACS 1-year survey in 2018 was $74,436. This was significantly higher than the national average of $61,937. While household income is higher the unemployment rate is also higher. In January 2020, the Department of Numbers recorded the rate at 6%. This almost double the national average of 3.6%.

Alaska does not have income tax. Furthermore, full-time residents even receive an annual dividend check from the state’s “permanent fund.” There is no statewide sales tax either. However, local cities and boroughs may charge their own sales tax at a maximum rate of 9.5%.

Other Alaska Costs That Can Affect Alaska Mortgage Calculations

When purchasing a policy, check that the insurance covers freezing. Some policies do not cover freezing if it causes your pipes or heating system to fail. Insurance companies may be unwilling to accept your claim if you have not made sufficient effort to prevent the freezing from occurring.

Residents of the state can also experience earthquakes. Earthquake damage is generally not covered by homeowner’s insurance and an additional policy will need to be purchased to protect your home.

When shopping around for home insurance in Alaska, watch out for how much coverage you need based on the structure of your home, your personal belongings coverage, liability protection, and coverage for your living expenses.

The actual amount you will pay in insurance will vary depending on your provider and where you live.

Title insurance is a one-time cost that protects the owner and mortgage lender against any future unforeseeable claims that come about regarding the property’s title. These claims may be overlooked at the time of purchase and arise in the future. Your lender will usually require a policy that equals the amount of the loan.

A home inspection is integral to ensure the property being purchased is structurally sound. An inspector will assess the foundation, roofs, basements, plumbing, heating and cooling systems, and electrical aspects of the home. The average cost of a home inspection in Alaska is $400. For an additional cost, other tests including termites, pests, mold, and radon can be carried out.