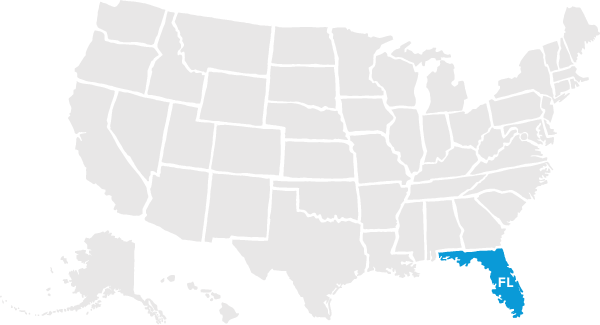 How Much Will Your Mortgage Be in Florida?

There is certainly plenty to see and do in the Sunshine State thanks to its many pristine beaches and tourist attractions such as the Walt Disney World Resort. At the same time, Florida is the third-most populous state in the US, having just over 20 million residents. The state is also growing rapidly, with an increase of 1.63% between 2018 and 2019.

Most of these citizens live near Florida’s 8,400+ miles of scenic shoreline, and such coastal cities as Jacksonville and Cape Coral are seeing some of the fastest population growth in the nation.

Houses in Florida are on the market an average of 129 days.

Factors That Can Affect Your Florida Mortgage Calculations

The biggest urban areas of the state are Jacksonville, Miami, Tampa, Orlando, and St. Petersburg. Each part of the state, including its major cities, varies in terms of its housing market: for instance, the median home value in Miami as of September 2019 was just shy of $340,000, while in Jacksonville, it’s roughly $180,000.

Florida stands out as a state with a rather affordable housing market, thanks in part to an effective property tax rate that is under the national average at 0.98%. This comes out to less than $1,800 every year for the average Florida homeowner.

A county official will appraise your property to determine your tax rate, once applicable exemptions are taken into account. Your home may be eligible for the homestead exemption or the Save Our Homes assessment which can decrease the value of your home.

Another benefit of purchasing a home in Florida is the absence of state or local income taxes, saving you money especially if you’re moving from a state with heavy tax burdens like New York, Minnesota, or California. This is one reason so many seniors across the country look to retire in Florida.

On top of that, there is no estate tax in Florida, meaning your inherited property including cash, investments, real estate, trusts, and others won’t be taxed. The state sales tax is also quite low, hovering between 6% and 8%.

While Florida is home to many types of businesses, the state's biggest industry by far is tourism, contributing nearly $70 billion to the state’s economy every year. No other industry in Florida employs as many people as well.

Florida also does considerable business in the agriculture and international trade sectors, while the space industry also brings considerable revenue into the state. There are more than 15 companies on the Fortune 500 list which call Florida home such as Publix Super Markets, Office Depot, World Fuel Services, and Hertz.

Homebuyers must be aware of the fees involved in their closing costs. Included in closing costs are mortgage lender fees, title company fees, and other administration charges that will vary based on your lender and where you’ve purchased your home. You’ll also need to pay for your title insurance, funding fees in the case of a VA loan, and mortgage and transfer taxes.

You should also be aware that Florida is one of several states that charges a mortgage, or documentary stamp, tax. This tax comes out to about $0.35 on every $100 of the price of your home. The transfer tax is typically paid by the seller of the property, however this can depend on the terms negotiated in making the initial offer. The transfer tax in Florida is $0.70 for every $100 of the home’s price, unless the home is in Miami-Dade County, where the rate is only $0.60 per $100.

While Florida is home to many types of businesses, the state's biggest industry by far is tourism, contributing nearly $70 billion to the state’s economy every year.  No other industry in Florida employs as many people as well.

Florida also does considerable business in the agriculture and international trade sectors, while the space industry also brings considerable revenue into the state.  There are more than 15 companies on the Fortune 500 list which call Florida home such as Publix Super Markets, Office Depot, World Fuel Services, and Hertz.

Other Florida Costs That Can Affect Florida Mortgage Calculations

Florida has some of the highest homeowner insurance rates in the country, the average insurance payment being over $1,700. You may also want to consider purchasing flood insurance which you can do through a private insurer or the National Flood Insurance Program (NFIP).

For those unable to obtain property insurance through the private market, you can take advantage of the Citizens Property Insurance Corporation, a not-for-profit entity designed by the state legislature. This is only an option for those unable to attain coverage by any other state-authorized insurance company, or if the prices of private companies are 15% higher than that offered by the CPIC.

Having a home inspection is a cost you can expect to cover during the process of purchasing a home in Florida, since the buyer carries the burden of finding any problems with the property. These home inspections can cost anywhere between $350 to $500 depending on the company you pick and the size of the home to be inspected. You are not obligated to inspect for mold, termite, radon or other issues but it is worthwhile service to add to your inspection.

Anyone who takes out a conventional loan in Florida will likely need to also pay private mortgage insurance (PMI) to protect the lender if the down payment is under 20%. PMI can range from 0.5% to 1% of the loan amount to be paid each month.

Since the passage of the Homeowners Protection Act of 1999, lenders are obligated to end PMI once the principal loan balance reaches 78% of the original amount. Furthermore, according to the law, the homeowner can request that PMI be dropped once they are assured the principal amount is only 80% of the original amount, so it certainly pays to be aware of how much you have left to pay on your mortgage.