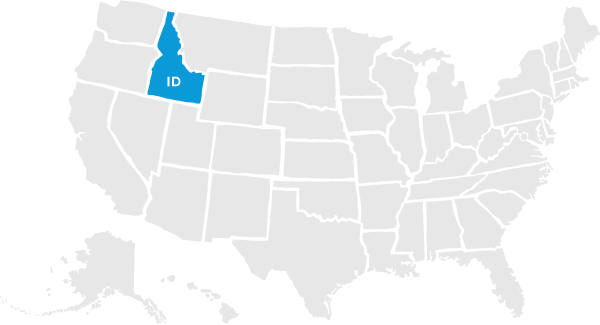 How Much Will Your Mortgage Be in Idaho?

Idaho is located in the northwest U.S., sharing a small portion of the border with Canada. Its rugged landscape features scenic stretches of the Rocky Mountains. The state has a large agricultural base with the United States Forest Service owning 38% of Idaho’s land.

Idaho has been coined the “Gem State” for its natural beauty. Although Idaho is ranked the 7th least-densely populated state in the country, the capital of Boise has been referred to as the fastest growing metro area in the country, according to Forbes.

Factors That Can Affect Your Idaho Mortgage Calculations

Idaho has approximately 1.7 million residents. It is the 14th largest state by land mass but the 12th least-populous in the U.S. Homes in Idaho have a median list price of $334,895, based on information collated in March 2020. The market is very hot, having seen a spike of 9.5% in home values over the past year.

Home prices in Boise have risen substantially over the past few years and currently have a median list price of $369,900. Home values in the past year alone have seen a growth of 10.3%. Just west of Boise is Nampa where the housing market is significantly cheaper. The median price of homes listed is $286, 000.

In comparison to the rest of the U.S., property taxes in Idaho are relatively low. The typical homeowner in the state pays $1,322 annually in property taxes. However, this will vary on the location of the home. Tax rates fluctuate between counties, but homeowners can expect to pay more for urban areas compared to rural areas. The statewide urban tax rate is a median of 1.438%, while the rural rate is 0.951%.

Idaho is a major agricultural state producing close to one-third of the potatoes grown in the U.S. The main industries in Idaho include food processing, paper products, lumber and wood products, machinery, electronics manufacturing, chemical products, silver and other mining, and tourism.

The median household income in Idaho is $52,225, below the national average of $60,366, based on information collected from the Census ACS 1-year survey in 2017. However, the unemployment rate is relatively low at 2.6%, as of March 2020, according to information gathered by the Department of Numbers. This is far below the national average of 4.4.%.

Idaho has marginal tax rates for income tax. Thus, the more you earn, the higher the tax rate. These brackets range from 1.6% to 7.4%. Sales tax is 6% with additional taxes applied to lodging at hotels, motels, and campgrounds.

Other Idaho Costs That Can Affect Idaho Mortgage Calculations

Homeowner’s insurance in Idaho costs significantly less than the national average with the majority of premiums falling around $730 annually. Most premiums will cover theft, lightning, wind, smoke damage and more. However, Idaho can experience harsh weather conditions and it is recommended for homeowners to purchase an additional policy that covers flood damage. A policy for this can be secured through the National Flood Insurance Program (NFIP). A policy to cover wildfires may also be beneficial if your home is situated in a wildfire-prone area.

Title insurance protects the owner and the mortgage lender against any unforeseeable legal disputes that might incur with your title. Your lender will usually require a policy that equals the amount of the loan. Most title insurance policies in Idaho cost a few hundred dollars.

A home inspection is ideal before the final sale in Idaho to ensure the property is structurally sound. Costs of the inspection will depend on the square footage of the home and location, but potential buyers can expect to pay between $235 - $330.

Most general inspectors will assess the foundation, roof, basements, plumbing, heating and cooling systems, and electrical aspects of the home. For an additional cost, tests for mold, radon or termite can be carried out.

Idaho does not charge any real estate transfer tax.