Today the FOMC raised the benchmark interest rate by 25bps to the range of 0.50 to 0.75%. This was widely anticipated and the decision by the committee was unanimous. The FOMC also forecasted the potential for three interest rate increases in 2017 versus the two they anticipated back in September. Currently the 10yr is trading at 2.55%, the highest in over a year, at a yield last seen in September of 2014.

The Fed reiterated their objective of maximum employment and price stability. They have long defined price stability as 2% inflation. The preferred inflation measure of Core PCE is running about 1.7% today, expected to be around 1.9% in 2017 and above 2.0% in 2018. GDP is expected to top 2.1% in 2017 after likely finishing 2016 at 1.9%.

Of course the statement above is really not that much different than previous statements plus or minus 0.2% here and there. The overall Fed objective has not changed at all. The huge question is the big unknown of the upcoming Trump administration and it’s underlying plans for fiscal policy. Large tax cuts and increased spending would accelerate inflation and would require the Fed to raise interest rates at a much faster pace.

Janet Yellen is trying to be very cautious about the Fed’s independence and not making any comments about the potential upcoming changes to the executive branch of the government. It is important she reflects her opinions about how to expand the economy; and she is well aware she should avoid antagonizing the President-elect. In her estimation the government should focus on policies that increase worker productivity, as it has stalled for many years. The economy is near full employment so the only way to grow is through increased productivity. New fiscal policy will not add many jobs since it’s at full employment but could increase government deficits through less tax revenue and more spending, in her opinion. I’m in agreement with her on both the tax cuts and increased spending.

I do believe the new administration should focus on keeping jobs in the US and potentially repatriating both money and jobs. That will drive some growth without the expense of existing jobs or deficits. A tax cut is about the most dangerous fiscal policy the new administration could tackle. Hopefully Ms. Yellen will be allowed to voice her opinions on future growth of the economy and her independence won’t be threatened by the new administration. The market certainly doesn’t want to see a war between the two most powerful people in America in 2017.

For now, the Fed will continue with the same rhetoric they have for the past several years of maximum employment and 2% inflation. The market will have to wait until 2017 to find out what the upcoming administration will do with fiscal policy, which will also take time to have an effect on jobs and prices. However I would expect major tax cuts and additional budget spending to cause interest rates to rise faster than expected based purely on inflation expectations. Remember, it’s not just inflation that drives rates but inflation expectations. Keep a close eye on GDP and inflation data, the two big drivers of interest rate swings for the foreseeable future. 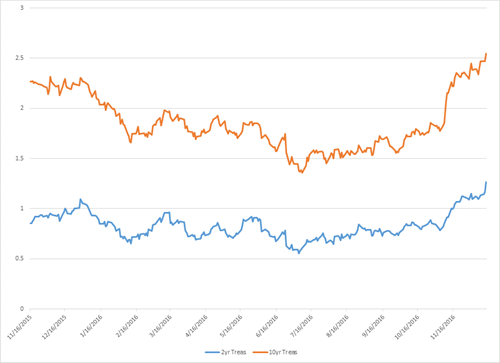