Perhaps there were no surprises Wednesday when the FOMC increased the benchmark rate by 25bps and has targeted the range of 0.25% to 0.50% for the overnight lending rate.  The surprise might be that even today mortgage rates are lower after the announcement.  Why does the Fed raising the key interest rate actually cause mortgage rates to drop?

First and foremost is that the market expected the Fed to raise rates so the change Wednesday was already priced into Treasury yields (and by association mortgage rates).  The movement in Treasury yields after Wednesday's announcement was almost zero.  In fact, almost every single market, commodities, high yield bonds, etc. were impacted very little.   Thursday morning the market opened to a stronger dollar (which is what happens when you reduce the supply of US dollars).  Combine that with the fact that foreign economies around the world are struggling.  Oil-rich countries have seen the price of a barrel of oil drop from $61 in the summer to $35 today, and for most of those counties, a recession is sure to ensue very quickly.  Therefore you have commodities and non-US dollar-denominated assets are all taking a hit.  That's driving investors into US Treasuries for safety and yield that is backed by an appreciating US Dollar.  Why appreciating?

The Fed also (via the dot plots) indicated they expect to raise rates four times in 2016, leaving the benchmark overnight rate at 1.375%.    This means they plan to reduce the supply of US dollars further in 2016, 2017, and 2018.  The US dollar becomes an asset of reduced supply, which in turn raises its price.  There is an increased demand for dollars as well as we are seeing in the Treasury market with the 10yr now at 2.25% versus 2.30% Wednesday.

Short term rates are primarily driven by the Fed.  Short-term rates are usually identified as being less than 2yrs to maturity.  In the last market update, I showed the increase in short-term rates as the 2yr has almost doubled in the last year (I included that chart below—today the 2yr is at 1.00%).  Long-term rates have been very stable, which is a reflection of long-term growth and inflation expectations being relatively unchanged.  With oil and other commodity prices falling, expectations for inflation are below the Fed's 2 percent target.  The market views long-term growth also to be relatively low and that is showing up in the 10yr yields. (remember 1. lower growth and lower inflation usually mean lower long term rates and 2. mortgage rates more similarly follow the 10yr treasury so if long term rates drop, mortgage rates are likely to drop).  The market actually expects the Fed to raise rates only twice in 2016.  That's a big disparity and should create some volatility as either the Fed, the market, or both adjust to reality.

I would expect volatility in the first quarter of 2016.  It really depends on how economic data from Q4 2015 and early 2016 looks along with how the entire economy adjusts to the new normal of a supposedly rising interest rate environment with low inflation and an appreciating dollar (and don't forget about jobs).   Each individual will have a dramatic impact on demand for Treasuries as well as the expectations for the Fed. 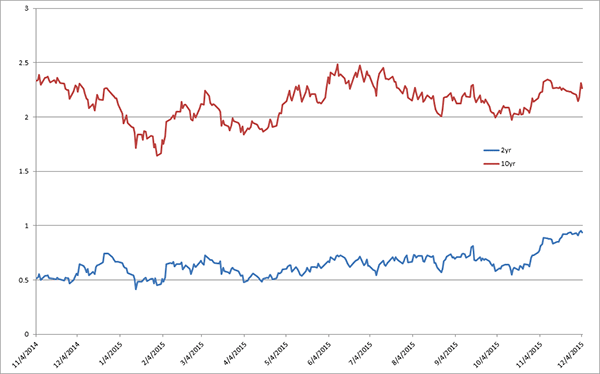 S&P Case Shiller Home Price Indices—I've normalized the grid for all markets to equal 100 on 1/1/1987.  S&P uses 1/1/2000 because several other cities only have data going back that far.  This method gives you a better perspective on prices, which for CA have averaged a 5% year over year increase, including the housing recession (remember it's an index, not prices so you shouldn't necessarily compare an index value in one city to another).  Denver has been one of the most consistent markets over this time period.  I didn't include markets where the data didn't go back to the 1980s.  Enjoy. 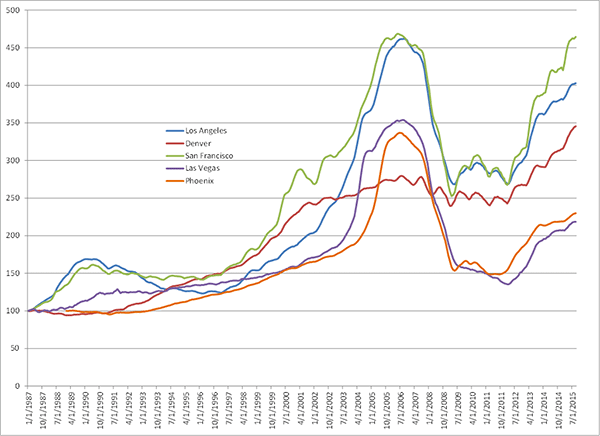