The first 100 days of the new administration begin as President Trump and his team race to action during this most influential time of his presidency. Leading into his inauguration, politics had dominated speculation over what executive orders and legislation would be the first order of business. The stock market and bond market certainly have reacted since Election Day, a move most should have seen coming as hope always peaks around the inauguration. But as hope begins to wane, it must be replaced with reality. The market can't trade on future expectations for very long before economic reality must be addressed. The Trump administration certainly has a lot of plans for the first 100 days and it's too early to tell what those changes will mean economically to the US (and other nations for that matter). The market sits in a very dangerous place, between built-up hope and reality. The question of what all of those changes will be and the economic reality of those changes could take several months to play out. Can the market continue to trade at these levels, a stock market at all-time highs and a bond market at yields not seen since mid-2014?

Today the 10yr Treasury trades at 2.50%, up 65bps since Election Day. There are a lot of forces impacting the bond market. Supply-demand and plenty of factors influence yields but today the forward views of GDP and inflation have the greatest influence on where yields move from here. On the one hand, there is a lot of legislation coming down the pipe that is believed to be very pro-growth. That bodes poorly for bonds and it could be months if not a year to determine whether any changes have a positive or negative impact on the economy, therefore the market will have to rely more on speculation than previous. What has anchored yields is low inflation namely oil prices, growth challenges around the globe, growth challenges domestically, and the extra divisiveness today between Republicans and Democrats. The trend today is for higher rates given the extra push by Republicans to promote growth by removing regulations and potentially lowering taxes. Keep an eye on oil as well, it's a great gauge for future inflation. Higher oil prices increase the likelihood of higher rates.

All that being said, I believe the Fed should be extremely cautious about raising interest rates and the chart below explains my beliefs. I've charted the Fed Funds rate versus GDP. Arguably I could have used PCE (personal consumption expenditures) instead of GDP but the results are the same. The blue line represents the Fed Funds target rate. First of all note, it's a continual decline since 1982. The beige line is quarterly GDP. It might be hard to notice in the graph but it has gradually declined over time. Only during Clinton's presidency in the '90s did both Fed Funds and the GDP rise. Recall during that time period the rapid rise in worker productivity thanks to the personal computer revolution, cell phones, and the internet. Arguably the Fed raised rates too much at the end of his presidency because GDP dropped as Clinton left office and Bush 1 entered office. Effectively every time the Fed raised rates, they've had to turn around and drop them to a lower level than what was in effect before the raise. Not an inspiring trend.

Now think about the Fed Funds rate; when GDP drops the FOMC generally lowers the Fed Funds rate to push GDP back up. If GDP goes too high then the FOMC pushes Fed Funds up to bring GDP down. And it is a continuous cycle, much like a teeter-totter. I've constructed the green line below which is the middle of Fed Funds and GDP. Think of it as the axis of the teeter-totter. As you can see this green line has been going down over time. I refer to this line as the economic reality of fiscal policy. Monetary policy moves both ends of the teeter-totter up and down via the FOMC and Congress moves the green line up or down via legislation (fiscal policy). According to the graph, history suggests it's going to be very challenging to raise the green line. Will new legislation raises the green line, can it raise the teeter-totter? The new administration believes they can. If they do rates will rise along with GDP. 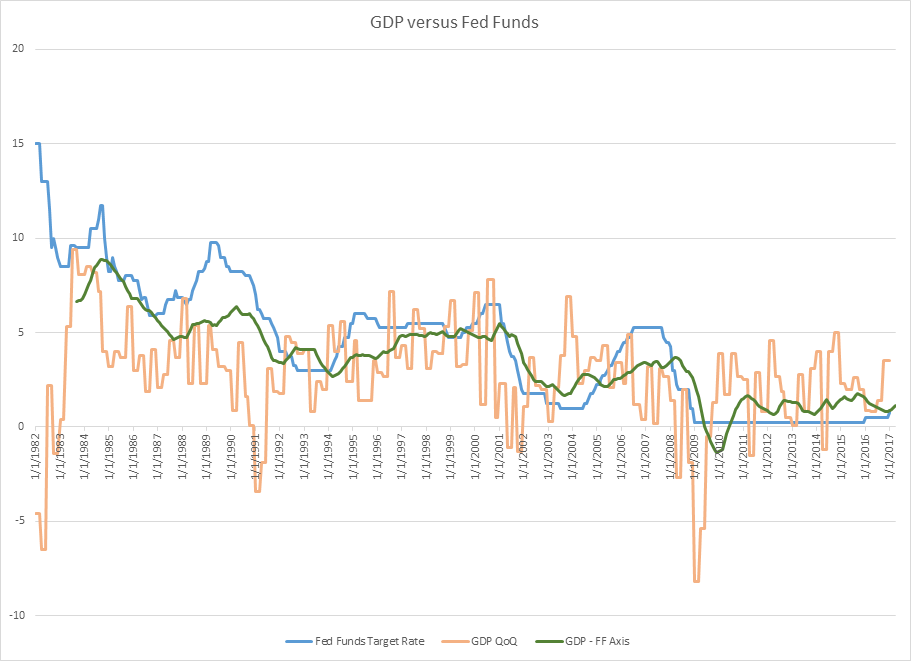