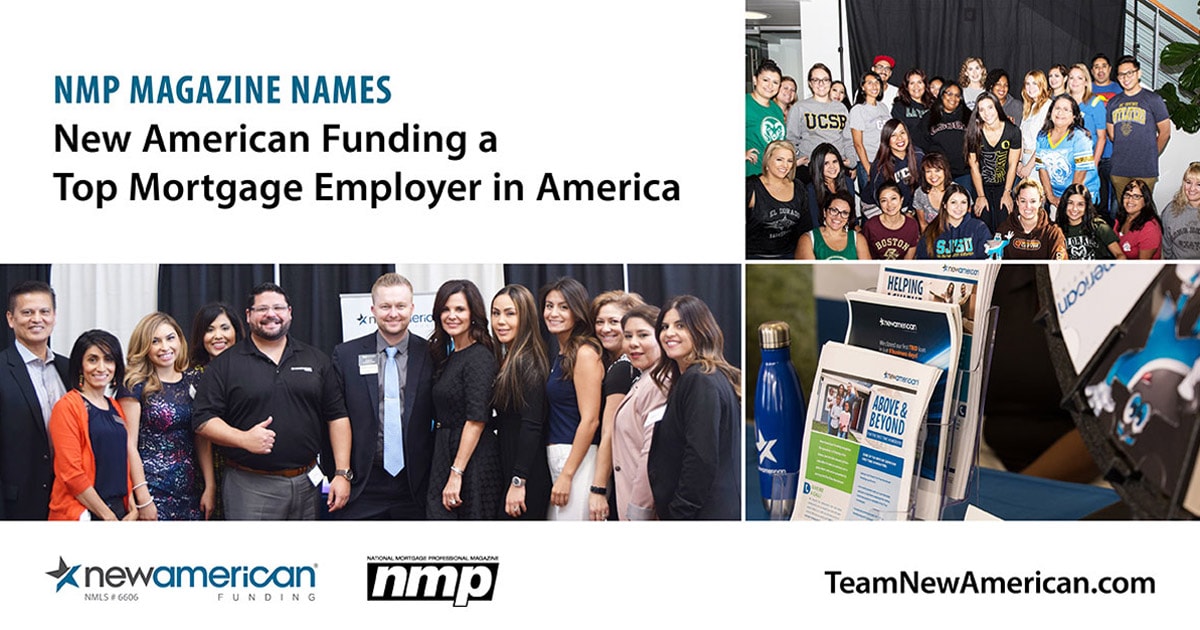 Tustin, CA – New American Funding, a national mortgage banker, announced today that National Mortgage Professional (NMP) Magazine named it one of the 2017 Top Mortgage Employers in the country. This is the third year in a row that New American Funding has made the list, which is based on a survey of company employees in several categories including compensation, marketing support, company culture, and innovation.

According to the poll results, NMP ranked mortgage lenders as a top employer in the region or across the nation. "We're thrilled that New American Funding has been named one of America's Top Mortgage Employers. We believe this recognition is a reflection of our commitment to cultivate a fun, family-oriented work environment," said Katie Traviglia, Director of Human Resources. "We're passionate about the culture we've created and believe it's one of the key reasons why our employees love coming to work and why new people are rapidly joining our team."

New American Funding underwent tremendous growth in 2016, hiring more than 1300 people and adding 40 new locations, which brought its workforce to 2300 employees between its corporate headquarters and more than 130 nationwide branches. The company has built a progressive business by leveraging technology, streamlined operations, and a state-of-the-art marketing division.

This recent acknowledgement is the latest in a line of accolades that New American Funding has received for its exceptional work environment including a silver 2016 Best in Biz Award for Best Place to Work, a gold Stevie® Award for Employer of the Year, and being named nationally by Fortune and Great Place to Work® as one of the 2016 Best Workplaces in Financial Services and Insurance. In December, Orange County Register ranked New American Funding the #1 Top Workplace in Orange County.

America's Top Mortgage Employers article is featured in the January 2017 edition of NMP.