For the last couple of weeks, we've seen interest rates creep up and up. In fact, the yield on the 10yr Treasury is now over 3%; something that hasn’t happened very often since the financial crisis. The graph on your screen shows the 10yr for the past 8 years. What's interesting is the fact that the 10yr has not sustained a 3+% yield for 30 straight days since 2011. 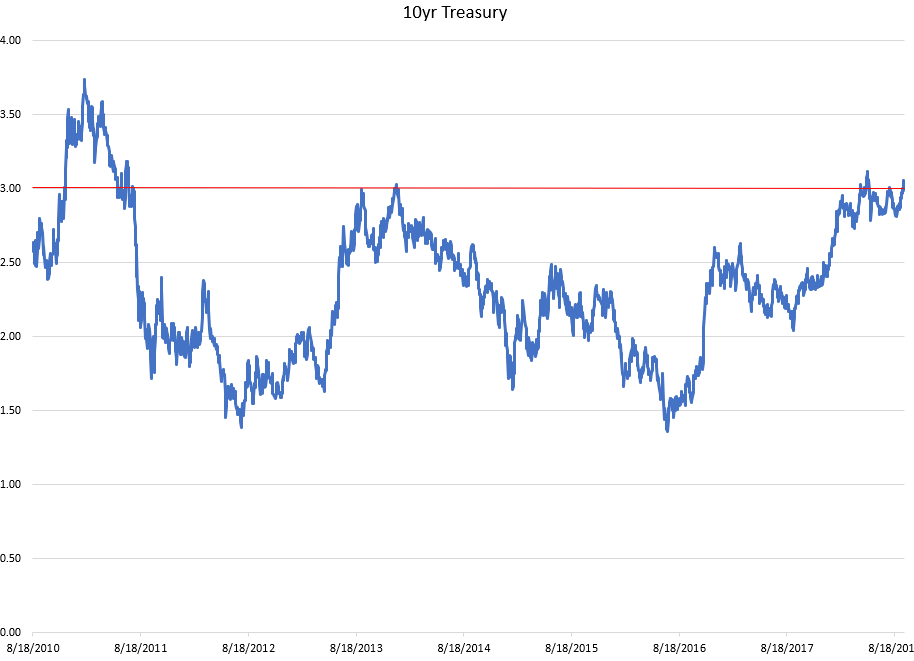 There are a lot of disagreements about where rates will head from here. Almost everyone agrees the Fed will raise rates 25 basis points next week. There is some disagreement on whether the Fed raises rates again in December. And the largest disagreement is on what the Fed will do in 2019. The range of predictions is between one interest rate hike to four.

In financial lingo, you have monetary hawks and doves. A hawk is a bird that flies high, so think of hawks as those that want rates higher. A dove is a low-flying bird, so in market terminology, they want lower rates.

The hawks believe the economy is strong, inflation is holding steady and the Fed will continue along its path to policy normalization. The hawks don’t believe the Fed needs to concern themselves with an inverted yield curve (that is to say a condition where the yield on the 2yr Treasury is higher than the 10yr Treasury). In their minds, the Fed is going to raise rates four times in 2019.

The doves on the other hand point to low inflation, an escalating trade war, low bond yields around the globe, and an inflated stock market. Doves believe an inverted yield curve could absolutely spook the market and it is a very strong recessionary signal. They believe the Fed will raise one to two times in 2019.

Who will be right is hard to predict but I will say that for the past several years the Fed has had to err on the side of caution and they should be more concerned with the trade war, stock prices, and an inverted yield curve than they do inflation.