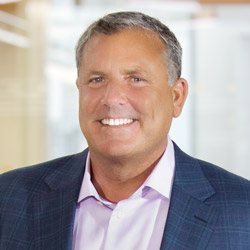 Rick Arvielo is a maverick, visionary, and the Co-Founder and CEO of New American Funding.

With integrity as his cornerstone, Rick built a company on values like teamwork, respect, and technological innovation - and aptly named it New American Funding, a mortgage company that has earned the admiration of the industry.

Raised in Palm Springs, California, Rick grew up in a family environment embracing honesty, creativity, and industriousness. He was encouraged to appreciate science, volunteer in the community, and participate in sports. With a competitive drive and an entrepreneurial spirit at heart, he opened his own car valet business at only 16 years old.

He later launched his second business, Paradon Industries, where he focused on marketing techniques and the myriad of advantages gained by infusing technology into the business model. Before selling the business, Rick built the company into the largest affinity check printer in the U.S.

Then, Rick’s journey in the mortgage industry began when he began working with an independent mortgage broker in 2001.

Rick quickly increased the small broker shop’s business and gained experience with the intricacies of mortgage operations. Identifying many areas in need of improvement, Rick began developing systems to remove inefficiencies in the mortgage process by automating repetitive, time-consuming functions.

He soon founded Broker Solutions Inc., a business created to provide optimization services to mortgage lenders. He later saw the opportunity to strike out on his own, and in 2003, Rick and his wife Patty established their own mortgage company, New American Funding.

The company began as a 40-employee call center focused solely on refinances. In 2011, Rick introduced purchase transactions to the company’s operations, and in 2012, New American Funding opened their first branch. The company’s retail division has since exploded and now has 163 branches nationwide.

In less than 20 years, Rick has transformed New American Funding from those modest beginnings into one of the top 20 mortgage companies in the U.S., one with more than 3,470 employees and a servicing portfolio of more than 243,000 loans for $64.2 billion.

New American Funding’s agile business model is responsive to consumer needs and proven to be less affected by market fluctuations thanks to Rick’s determination to weave technology and compassion into the company’s infrastructure and operations. Under Rick’s leadership, the mortgage company has evolved into a Fannie Mae, Freddie Mac, and Ginnie Mae direct lender, seller, and servicer, with call center, distributed retail, and builder divisions.

With no major mergers or acquisitions, Rick and Patty have managed to retain the family-owned business culture that set New American Funding apart from other lenders since day one. Rick’s entrepreneurial style resonates throughout the company and attracts like-minded individuals who embrace a spirit of ingenuity, listen more than they instruct, and cooperate more than they direct.

Perhaps even more impressive than Rick’s accolades, corporate leadership, and accomplishments is his leadership in the industry. He is involved in several member associations that play a vital role in the current and future states of mortgage finance.

On a national level, Rick frequently lobbies on behalf of the industry to federal policymakers. He was Chairman of the Mortgage Bankers Association Political Action Committee in 2017 and 2018.

He also previously sat on the Board of Directors for the Mortgage Bankers Association (MBA), has held a seat at the MBA’s Residential Board of Governors, and previously served as a member of the Board of Directors of the California Mortgage Bankers Association. Rick currently serves in an elected position on the steering committee for the Mortgage Action Alliance Committee.

Rick’s involvement with these associations comes from his passion for making a positive impact on the industry for future generations.