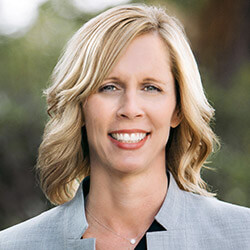 Christy Bunce is an experienced mortgage leader who has been instrumental in New American Funding growing into one of the nation’s largest lenders.

As Chief Operations Officer, Christy leads the day-to-day operations of one of the nation’s fastest-growing mortgage lenders. Christy is involved with every aspect of New American Funding's business and has helped the company expand into the successful organization it is today. Today, Christy oversees New American Funding’s entire mortgage lending pipeline, managing the lender’s operations, sales, and servicing operations.

Under Christy’s explicit supervision, New American Funding has increased its lending volume markedly over the last several years. She has been instrumental in expanding the company’s retail operations and inside sales force, while helping to implement a truly unique culture known as NAF 360, which is an all-around commitment to caring about the company’s employees, business partners, and customers.

From national lending to operations to loan servicing, the company has significantly expanded under Christy’s leadership. Through her vision, hard work, and determination, she helped grow the company to 3,470+ employees, 170 branches in 34 states, and a servicing portfolio of over 243,000 loans for $64.2 billion.

Christy successfully pushed for New American Funding to become a Fannie Mae, Freddie Mac, and Ginnie Mae direct lender, seller, and servicer years ago. She now works closely with the GSEs and investors on lending initiatives, specifically those for typically underserved communities.

She also partners with the company’s President, Patty Arvielo, on a career-development program called, “If You Want to Grow, We Want to Know.” The program allows employees to discuss their career goals directly with the company’s senior leadership to facilitate the employee being deservedly moved up or guided on the right track.

Christy’s importance to New American Funding has also been recognized throughout the mortgage industry and beyond. In 2021, Christy won a Gold Stevie Award for Female Executive of the Year for companies with more than 2,500 employees from the Stevie® Awards for Women in Business. Christy was also named a 2021 Mortgage Star by Mortgage Women Magazine and a 2020 HW Vanguard by HousingWire.