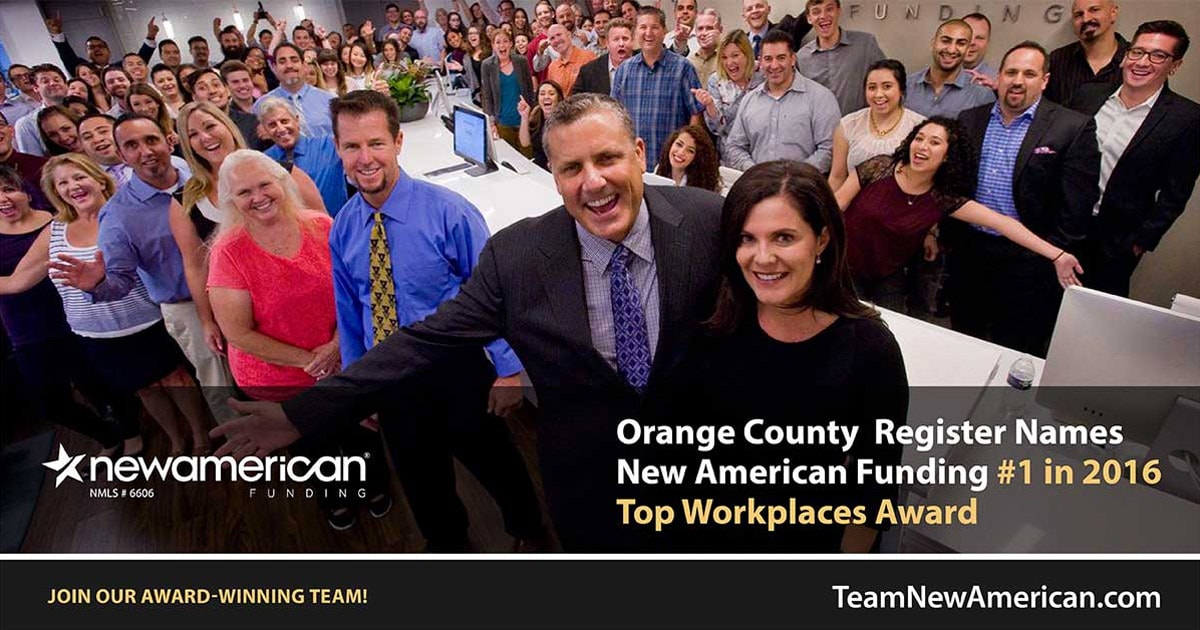 New American Funding announced today that the Orange County Register ranked it #1 on its list of Top Workplaces in Orange County. This is the 5th consecutive year New American Funding made the list, ranking #3 last year. The list is based exclusively on survey results from employees in key areas related to their work culture, including the strength of the company's values, the effectiveness of the company, and the ability for employees to reach their potential.

Leading research firm, WorkplaceDynamics administered the survey, which focused on the aspects that have the biggest impact on employee engagement. In order for a company to be selected a Top Workplace, it had to meet strict standards for organizational health.

"It's not only an outstanding honor to be named the #1 Top Workplace in Orange County but it's an awesome testament to why so many people are joining New American Funding. We believe in creating a culture that inspires people to want to come to work each day," said Katie Traviglia, Director of Human Resources. "We're more than a team of professionals. We're a family who works hard while having a good time."

New American Funding has undergone tremendous growth in 2016. The mortgage lender hired more than 1200 people and added 36 new retail branches, bringing its workforce to 2300 employees between its corporate headquarters and 122 branches.

This recent award is the latest in a line of accolades New American Funding has received for its exceptional work environment including a silver Best in Biz Awards 2016 for Best Place to Work, a gold Stevie® Award for Employer of the Year, and being named nationally by Fortune and Great Place to Work® as one of the Best Workplaces in Financial Services and Insurance 2016.