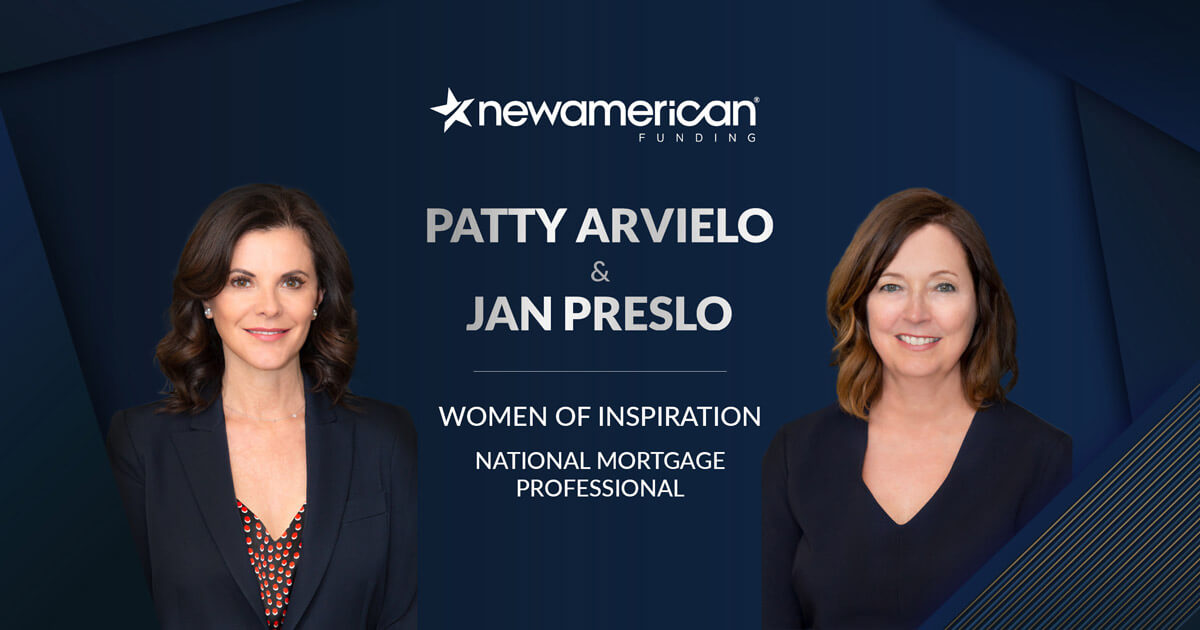 New American Funding, proudly a woman-owned and woman-led company, is pleased to announce that two of its senior executives, Co-Founder and President Patty Arvielo and Executive Vice President, Production Jan Preslo, were honored by National Mortgage Professional as Mortgage Lending’s Women of Inspiration.

The award recognizes the “most inspirational women across all levels and sectors of mortgage lending.”

Arvielo is a self-made entrepreneur with more than 40 years of experience in the mortgage industry. She co-founded and leads the nation’s largest Latina-owned mortgage company. A first-generation Hispanic American, Arvielo drove New American Funding to become an industry leader in lending to minorities through the company’s Latino Focus and New American Dream initiatives.

Arvielo is an ardent believer in the benefits of mentorship, which led her to create several distinct mentorship programs that aid in the development of New American Funding employees and external mortgage professionals.

Beyond her leadership of New American Funding, Arvielo was recently re-appointed to serve as a member of the Housing Counseling Federal Advisory Committee, a group that advises the Department of Housing and Urban Development on ways to build sustainable homeownership. Additionally, Arvielo is a member of the Mortgage Bankers Association Residential Board of Governors, and the Mortgage Bankers Association Affordable Homeownership Advisory Council.

“I am thankful to National Mortgage Professional for recognizing me with this amazing honor,” Arvielo said. “I am proud to lead a truly 21st century company, one where everyone is encouraged to share their voice, their thoughts, their ideas, and their visions.”

Preslo serves as a key member of New American Funding’s senior leadership team and directly oversaw the growth of the retail mortgage team from dozens of employees in Southern California to a workforce of more than 2,000 nationwide before recently being promoted to Executive Vice President, Production.

In this role, Preslo works closely with other senior leaders throughout the company to support the sales team’s success, serves as a mentor to those seeking career advancement, and much more.

Preslo considers herself a support leader, focusing her efforts on helping her team succeed. Preslo’s leadership delivers results. Under Preslo, the retail division grew originations every year for the last eight years.

“This is an honor I share with our entire team, who are my inspiration each and every day,” Preslo said. “I am fortunate to be able to lead them in the noble mission of putting people in their dream homes or helping them meet their financial goals with a refinance.”