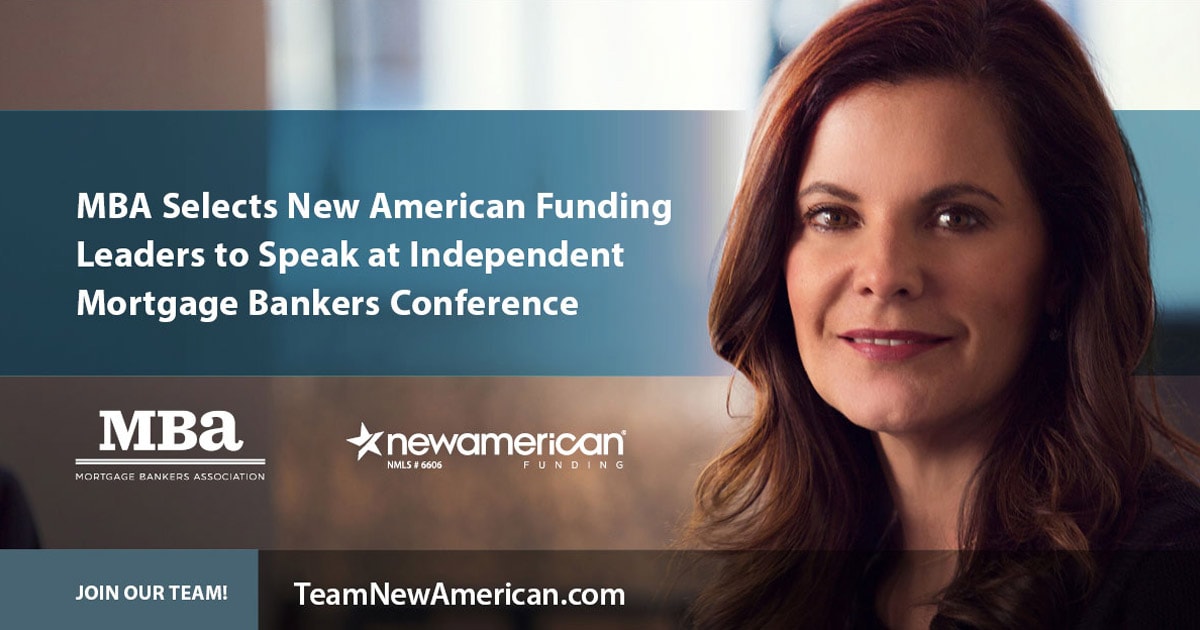 New American Funding announced today that its Co-Founder and President, Patty Arvielo has been selected by the Mortgage Bankers Association (MBA) to speak at its 2017 Independent Mortgage Bankers Conference (IMB). Arvielo will speak during a panel on, "Executive Perspectives," providing strategies and insight for the coming year.

Arvielo, along with other executives, will cover a range of relevant issues impacting independent mortgage bankers including market conditions, loan products, technology changes, and regulatory matters. "I always count it a tremendous privilege when MBA invites me to share my viewpoint as a leader within the mortgage industry," said Arvielo. "I look forward to contributing insight that spurs participants to keep a progressive mindset as our industry continues advancing."

Arvielo manages operations and sales for New American Funding, while maintaining an active advocacy role within mortgage banking by serving on the Diversity and Inclusion Committee and the Consumer Affairs Advisory Council for MBA. She also resides on Freddie Mac's Community Lender Advisory Board.

Sherrie Koehler, FHA Credit Policy Manager at New American Funding, will also address conference attendees during a panel on, "New Products for Today's Homebuyer," which will focus on loan programs that accommodate a changing demographic of borrowers in low-and-moderate-income communities. Koehler has more than 30 years of mortgage experience and joined New American Funding in 2011.

During the conference, MBA will host its first Mortgage Bankers Association Political Action Committee (MORPAC) meeting of 2017. New American Funding's Co-Founder and CEO Rick Arvielo will preside over the meeting as MORPAC's new chairman.  Rick Arvielo orchestrates overall growth for New American Funding and has been an influential leader in the mortgage arena.  MBA has appointed him to spearhead advocacy efforts within the nation's political system on behalf of the industry.

The IMB Conference is January 23-26, in Palm Springs, California.