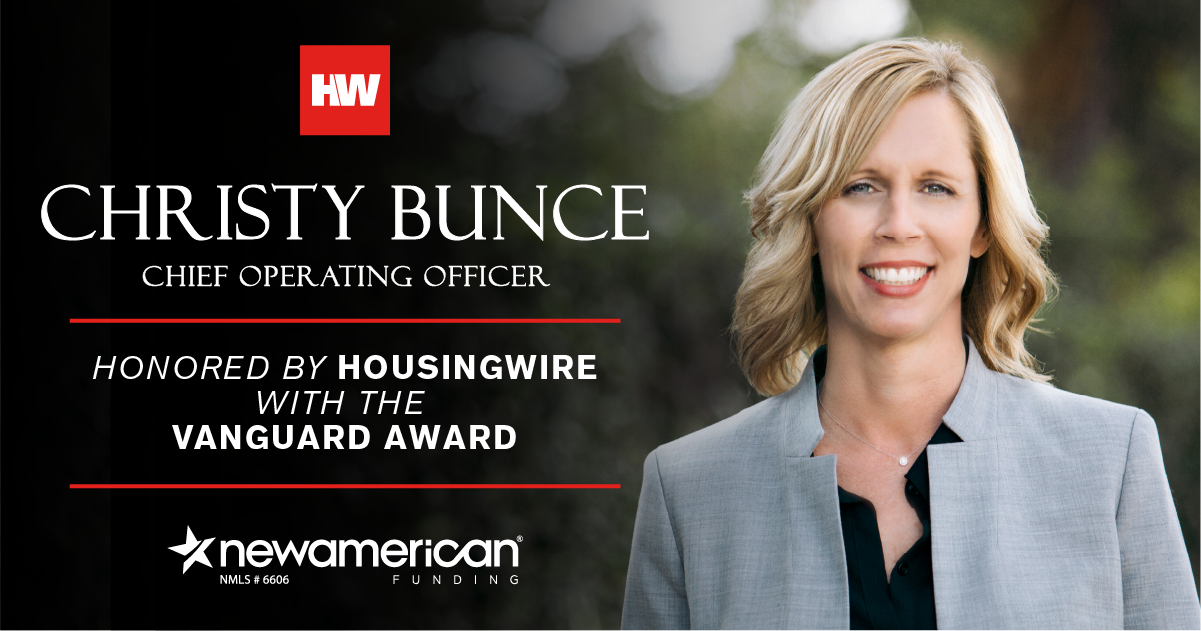 New American Funding is proud to announce that Chief Operating Officer, Christy Bunce, has been named one of the top leaders in the housing industry by HousingWire, a housing and real estate industry publication.

Bunce was named as one of the 2020 HW Vanguards, an award reserved for the true leaders and visionaries in the housing industry.

According to HousingWire, the Vanguard award “recognizes C-level industry professionals and business unit leaders who have become leaders in their respective fields within housing and mortgage finance — those whose leadership is moving markets forward, each and every day.”

Bunce was honored for her critical role at New American Funding. As Chief Operations Officer, Bunce leads the day-to-day operations of one of the nation’s fastest growing lenders. Bunce is involved with every aspect of New American Funding's business, which has helped the company expand into the successful organization it is today.

Bunce came to New American Funding nearly 12 years ago, initially serving as Operations Manager and overseeing 15 of the companies approximately 50 employees at the time.

Bunce’s role at the company grew in tandem with the company itself. In 2012, Bunce was named Chief Operating Officer. Bunce’s experience and expertise in loan processing, underwriting, and funding served as a guide for New American Funding’s growth from a California-based call center to a nationwide lender with a massive retail footprint.

“I’m incredibly honored to be named a Vanguard, but any honor I receive would not be possible without the amazing team we have here at New American Funding,” Bunce said. “More than anything, I consider this a team award. I share this honor with all of our 4,000 employees, who have consistently gone above and beyond the call of duty in a truly extraordinary year.”